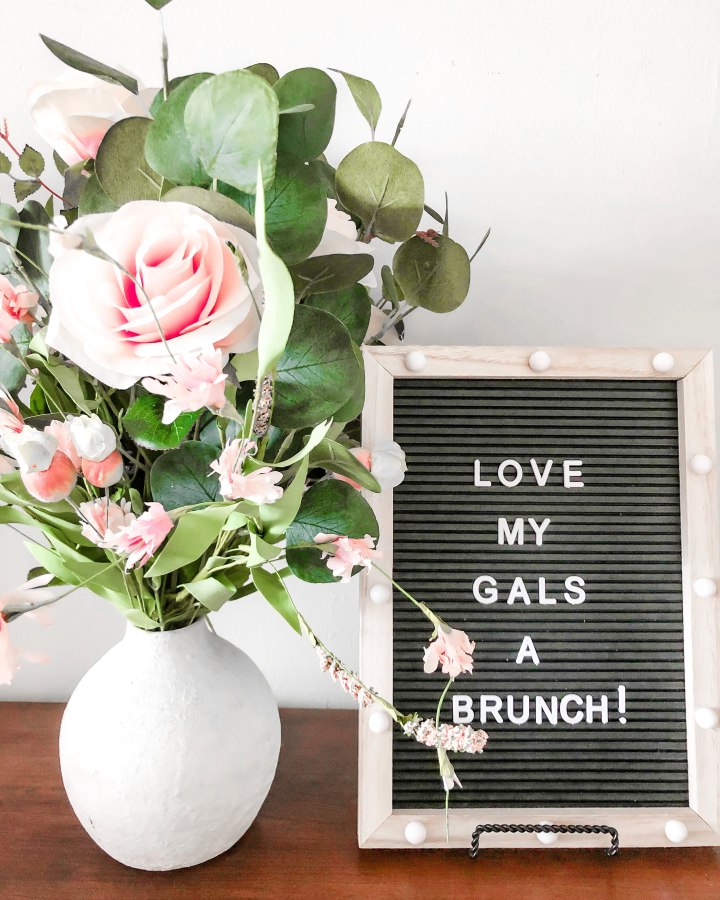 Hi friends! I understand it’s an ironic time to be positing about a topic that involves gathering with groups of people during a time when you can’t gather with more than ten and even then should be keeping a six foot distance. But, I’m hopeful that this too shall pass and we will we get to social gather once again! In the meantime, you can use this time of quarantine to start planning your “free from quarantine” party and I’m here to help advise on how to do it in a budget-friendly way. I’ve tried to link to tutorials and products where possible and if there’s a tip on a lesson I learned during the process, I’ve tried to share that as well!

I grew up watching my mom be the ultimate hostess. Whether it was birthday parties, graduation parties or even when we’d show up unexpectedly with friends, my mom was always whipping out food and going to all ends to make our guests feel welcomed. Her love to host has been one of many things that has been passed down to me. You can see why this whole quarantine life is my worst nightmare…

In February, I hosted a Super Bowl Party and a Galentine’s Brunch. I really wanted to go all out for these and have some fun but also didn’t want to break the bank. So, I got my creative juices flowing and had some fun bringing my visions to life. For the purpose of this post, I decided to focus on the execution of planning and hosting my Galentine’s brunch and will break it down into three sections: food, drink, and decorations & games.

Let’s start with the most important part of brunch: food! I decided to make Galentine’s brunch a potluck. I committed to providing mimosas, chocolate fondue and things to dip into it, mini heart waffles and cupcakes (literally FunFetti with white icing I dyed pinkish with red food coloring). I created a Google Doc for people to sign up to bring an item and help reduce duplication of food. Because it was potluck style, we had the most amazing spread. From avocado toast, to a charcuterie board, to sparkling fruit, to donuts, bagels, bacon and casseroles…can you say #foodcoma?! Had I provided all the food myself, I can promise there would not have been close to the amount we had nor the wide variety!

Chocolate Fondue
No Galentine’s celebration is complete without chocolate! I recently got a crock-pot and found the simple recipe linked in the title. I got a huge bag of chocolate chips from BJ’s for $11 that I’m still trying to finish…
TIP: For the chocolate fondue recipe I linked, I actually had to keep it cooking closer to 1.5 hours and it needed frequent stirring to thicken it up).

Sides to Dip into Fondue
I couldn’t just provide chocolate fondue and expect people to eat it plain…that’s not fondue! I decided for the “dippers” I would do pretzels, fruit and Rice Krispie Treats. I figured people could also dip the waffles I made into the chocolate if they wanted to as well! I got a tub of pretzel sticks, raspberries, strawberries and blueberries from BJs which is where I got most of the food and drinks due to bulk sizing. The fruit I didn’t use with the fondue I used for my “Bubbly Bar;” more to come on that. For the Rice Krispie Treats, I already had a box of Rice Krispies which is why I decided to make them. I had used this recipe in the fall to make pumpkin-shaped Rice Krispie’s and so I used it again but instead of making them into balls I just put them in a 9×13 dish and used a heart shaped cookie cutter to make them into hearts. I used red food coloring to make them pink.
TIP: I would start cutting them with the cookie cutter pretty quickly after mixing them so that it’s easier to mold the leftovers and make more hearts! When they’re still hot they’re super sticky but spraying some Pam on your hands will prevent that.

Waffles
I found the CUTEST mini-heart waffle maker online at Target and when I went to the store they were out. They were also sold out on the Target website and on Amazon. I had already committed in my mind to having heart waffles so, I got the round waffle maker and used a heart cookie cutter instead (these are not the ones I have but a great deal).

I thought it would be super cute to have a “Bubbly Bar” where the girls could create their own mimosas! I got four normal sized bottles of champagne from BJs for $6 a bottle and then two mega bottles of champagne from Safeway which I don’t remember the price of those. For the mixers I stuck to the favorites: OJ and cranberry juice. As I mentioned I used left over blueberries, strawberries and raspberries from the fondue. Since many drove, I filled our dispenser with some water and brewed a pot of coffee as well!
TIP: Having some sort of beverage dispenser has come in clutch for us. My roommate got it for our Christmas party and I have used it so much! Highly recommend investing in one.

Photobooth
Figuring out the food was the easy part. Making my vision a reality, that was going to be the real challenge. I knew I wanted to do some sort of photo booth. After Pinteresting for some inspo, I decided I wanted to do a tassel garland and balloon arch. I looked on Amazon for tassel garlands and they ranged from $8-$15. I know that doesn’t seem super expensive, but I saw a tutorial on how I could do it myself, and so I figured I’d save a couple bucks. I got packs of different shades of pink, gold and white for a little over a dollar with tax each and already had the string. Truth be told, the amount of time it took to assemble, I’m not sure those couple bucks were worth it! I was really proud of my creation and I’m sure I’ll use it lots in the future. I also only partially made the one for the “Bubbly Bar” as I found the red tassel garland at Dollar Tree but they were really spaced out and I had extra gold tissue paper so I added the gold tassels in between.
TIP: Instead of rolling the tissue paper after you cut it, just scrunch the middle. I didn’t start doing this until I was almost done but it makes it so much faster and you’re still able to twist it just as easily! If you do three colors, you should only need one pack of tissue paper of each color.

Next was the balloon arch. I went back to my trusted DIY best friend, Pinterest, and found tutorials using fishing line. When I went to Hobby Lobby to get some sturdy fishing-line type string I instead came across this balloon strip that has holes for the balloons already! I highly recommend doing this because it’s reusable and made it so easy! I also got solid color balloon packs at Hobby Lobby in different shades of pink and gold for $1 and got hot pink and white ones for $1 at Dollar Tree. I don’t own a helium tank so I had to blow up the balloons myself. Because it wasn’t helium that filled the balloons they didn’t rise and float on their own which made building it tricky. I used tape and a cheap party weight I found at Target for $1 to keep it upright. For the “love” balloon prop, I ordered it from Amazon (this is actually not the one I ordered but cheaper than the one I got).
TIP: If you have a helium tank, use that. I should probably invest in one since they’re only like $30 and I’ve made two balloon arches but if you don’t plan on doing this often, tape and something to weigh it down will work.

Bubbly Bar & Food Table Accessories
The “Bubbly Bar” garland and the heart garland behind the food table, I made with my Cricut. I used the cut feature to cut the words and shapes on cardstock I already had and then hot glued them to some string! For the pink table cloths all I have to say is, “Dolla make me holla, honey boo boo child.” Seriously though, the Dollar Tree was perfect when it came to having a good variety for the basic decorations I needed. Table cloths, plates, napkins, cups, utensils, and paper straws were all purchased from Dollar Tree. The carafes the juices are in for the mimosas I also found in the Valentine’s Day section of the Dollar Tree ! What you can’t see is on the opposite side they have a gold lock that says “love.” I personally thought it looked tacky which is why they are facing the opposite way. The chalkboard stands and the clear bowls holding the fruit on the food table, the champagne flutes, and the letter board, were all found at Hobby Lobby. The chalkboard stands are by far one of my favorite purchases! I was gifted the cake stand the cupcakes are on but I know you can find it at TJ Maxx, Marshall’s or Home Goods for MUCH cheaper.
TIP: I tried to use nail polish remover to take off the gold lock stickers on the carafes but instead it just took out a lot of the pigment of the carafe.

In my mind, no Galentine’s brunch is complete without some girly game. I found both “This or That” and ” What’s in Your Purse Game” on Pinterest. I recreated them on my own using Word and then printed them and matted them onto cardstock. I was able to fit two per piece of cardstock. Because I had friends coming from different areas of my life I also thought the games were a good way to break the ice and get everyone to interact! I love bringing different groups of friends together and creating one big one.
TIP: I did not purchase any prizes for the winners of the games but definitely one enhancement I would do next year.

I’m not going to lie, many late nights occurred to prepare for these gatherings but I can only blame myself. Hosting back-to-back weekends and deciding to go all out the week before is not something I’d recommend. Allow yourself time to plan and gather the materials you need, it’ll make the experience less stressful. Luckily, I used the Super Bowl party as my trial run for my Galentine’s brunch although due to limited time, I didn’t get to do some of the things I had planned too like create props for the photobooth or nametags for the guests.

One thought on “The One About Hosting Within a Budget”