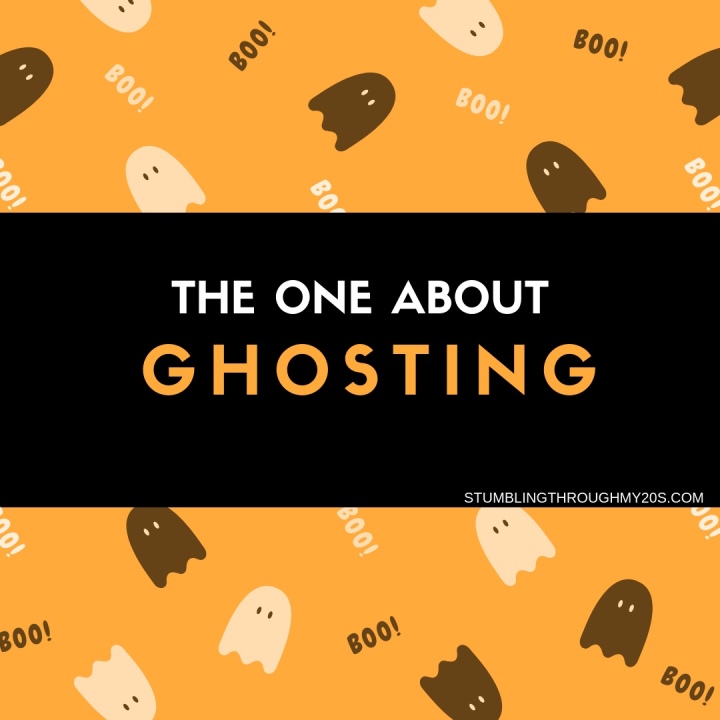 As Halloween approaches and everyone gets their costumes ready and pumpkins carved, it also has me thinking about ghosts. I assume all my millennial friends know where I’m going with this. For those who don’t know, I’m not referring to Casper or the scary kind typically associated with Halloween, I’m referring to someone you have either met or have been in constant communication with for a while and all of a sudden they stop responding without any indication.

It has now become the norm for people to “ghost.” It’s definitely become more common in today’s culture with the growth of dating apps. This is not saying I’ve never ghosted someone, I would be lying if I said that. I do want to clarify what I’m really referring to in this post isn’t just some text exchanges back and forth. More so, once the investment has been made from either or both parties, typically once an in-person meeting has occurred.

My major issue with ghosting is that it allows people to get away with not owning up to their mistakes, sharing their true feelings or dealing with any sort of conflict. That doesn’t justify just all of sudden cutting all communication with someone. You aren’t going to grow as a person or in a relationship if you just run away from it all.

In my opinion, ghosting is definitely the easy way out. Especially, for those who don’t like confrontation. Look, I don’t like confrontation as much as the person next to me. However, I find it much more respectable when someone is upfront with me in how they are feeling or their intentions, even if it’s not the outcome I may want.

Disclaimer: if you’ve tried to confront the situation, whatever it may be, and the other person is still persisting, then I think that is fair to cut ties because at least you tried. This is also not referring to situations where you may have received an inappropriate message from someone and not wanted to entertain it, I totally get that.

What I’ve always struggled with is why we as a society put up with this? Why has it become ok for others to treat each other this way? Has everyone forgot the Golden Rule: Treat others the way you would want to be treated?

Again, I’m not claiming that I’m perfect and that I know it all, but it’s something that I know really dampened my self-esteem and has dampened others’ in my life as well. It breaks my heart to see people allowing other’s cowardly behavior define how they view themselves.

I guess the purpose of this post is really just to encourage everyone to think about how their actions, one as simple as not responding to a text, could effect someone.

I’m going to hop off my soap box now…